Today, I created a new world because I really wanted to make something in a book, but I didn’t have leather in Vellichor. While in that world, which I named “Sh*t”, I saw that the animals were rather drab. Since the world-wide web has many things, including animal mods, I figured I could just search it up. After a while of finding mods in older versions or ones that required OptiFine instead of Forge, I stumbled upon the Genetic Animals Mod. I did some research, realized it would make everything more complicated, then downloaded it.

To start off, I did a bit of work on the mines, making stairs so in and out would be easier. I didn’t want to wait for all the stone to smelt, so I went out to find some wood for an animal pen. I was low on pretty much every wood other than oak, and using oak wood for anything other than a house’s framework is a big no in my book. So, I took my saplings and planted them outside of Vellichor. For reference, Vellichor is the valley in which I am building, and I am yet to choose a world name.

After having planted saplings of the river and birch tree variety, I cast off to go find an animal. I was running around and exhausting my hunger bar when I ran 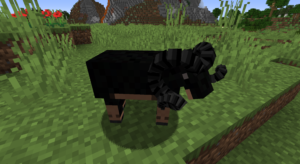 into a male sheep just outside where I was building my pen. Near him were two female sheep that I also brought back to base. At this point, they were tearing up the grass, so I went to get a hay bale and was pleased to find the three sheep looked right at home in their pen. I bred them with wheat, then went off to find cows.

Instead, I found two adorable chickens in the swamp that I enticed with seeds and led back to the pen. They seemed to hate the entire journey and kept 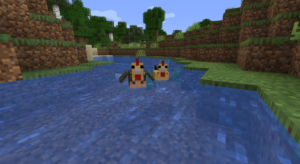 walking into the water rather than walking normally. After about five minutes, they were in the pen with the sheep and I bred them. Realizing I had no idea how to tell when the sheep would give birth nor if the breeding of the chickens actually did anything, I resorted to the world-wide web; specifically, the Genetic Animals Mod front page. I learned that Shift+RMB would open up a menu in which you could see the animal’s hunger, age, and sex. Thankfully, the wheat was effective and the sheep was pregnant. As for the hen, her eggs were fertile, so I got to hatch a little baby chick.

Moving on from the animals, I decided I needed to find a village and trade with the villagers. I departed on a noble quest to find civilization and got quickly distracted by a spruce forest by the open ocean. I needed spruce, so I cut down a few trees and went to the coast to see the ocean, hoping to find some sea creatures from Upgrade Aquatic. I instead was greeted by a large purple 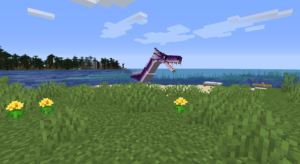 sea serpent who proceeded to outswim me, leap at me, and kill me. Quickly I ran back to my death point from base to find my items scattered across the ground and the serpent killing the local sea life. I grabbed the stuff and made a run for it, being constantly terrified by the serpent’s hisses.

After that fatal encounter, I figured that there was nothing worse out there, so I kept going, this time avoiding the ocean. I quickly arrived in the middle of the plains biome and saw a cyclops. I decided the cyclops probably wouldn’t notice 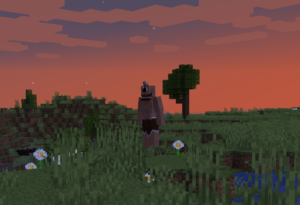 me, so I ran past it (staying about 30 blocks away). Then I saw another. And yet another. I was in the middle of a triangle formed by three large one-eyed people. But, I saw a village, so I tried to head over there. I somehow succeeded, but then realized the village had a huge charred nest right next to it, with a dragon flying above. These guys really chose the worst place in the world to live.

Having survived my (second, I died on the first) encounter with a sea serpent, I figured an adult fire dragon would have the same area of perception. I was wrong and the dragon flew at me when I was still far away from any form of shelter. Then came a blur of mining down as the dragon set everything above me on fire. I mined away and then tried to get back up to the surface, which resulted terribly, as shown by my recording of the event (this is the end result, the whole attack lasted 10 minutes).

That is where I am as of now. On half a heart, about to burn to death, and my items are bound to be burned as well. Many things went wrong, I just hope I can get there before my stuff despawns. But alas, that is a task for another day.

Recently, I’ve been playing a lot of Minecraft, specifically the modded kind. I created a new world in which I’m mostly building (What did you expect? Actual gameplay?). The two mods I installed (by myself because I’m a very smart person), are the Ice and Fire mod and Upgrade Aquatic. The two are absolutely amazing together! Ice and Fire has dragons and a bunch of mythological creatures, while Upgrade Aquatic has a ton of fish. I love both, so I’m really glad I could figure out how to install mods. Also, I installed a mod called Origins, but it’s not compatible so I’ll try it after I finish with the others.

I only just started two days ago, but I have a mine down to diamond level (y-coordinate of 11) and a little pumpkin farm. I have to say, the water plants and fishes added by the aquatic mod are so pleasing to look at. I set up base near a lake, so I can place a bunch of plants that are annoying to go through, but look pretty. Unlike with people, looks do matter and if it’s sub par, I will destroy it. F*ck you ecosystem, I need my color palette!

In my little area where I have set up base, I have a mine that goes down into not one but two ravines, a pumpkin farm which is rather pathetic, a beautiful pond full of pike, and lots of trees. I must say, I went a bit crazy with the mulberries, but what can I say? I simply love them. 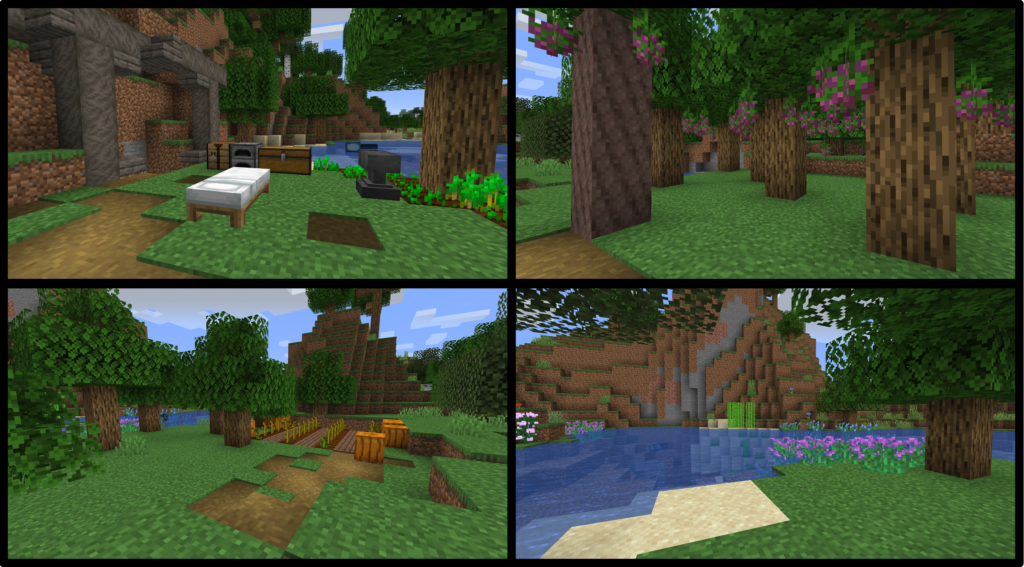 I am greatly surprised by how much I accomplished within two days. I already got diamonds, a farm, and something to later worship. That last one was when

I was killing some fish for food, and found this beautiful black pike swimming around. I named him Abyss and he is living happily in a small pond by my pumpkin farm.

As for the worshipping part, I have a feeling that Abyss here is going to get involved in some shady activities requiring me to think outside the box for explanations. Just a hunch, or is it?