Ah yes, the beautiful, vibrant, and deadly nudibranchs. These sea slugs belong to the clade Nudibranchia and are often divided into two sub-groups: dorid and aeolid nudibranchs. Before we get into all that, you do not pronounce nudibranch like “nudi-branch”. It’s pronounced more like “nudi-brenk” because why not.

Moving on, the first subgroup we’ll be covering is the dorid nudibranch infraorder (again, a taxonomical term). These bad boys have a branchial plume, AKA: a bunch of gills circling their anus. Yes, they do in fact breathe around their assholes, much like American politicians. Dorid nudibranchs are usually a more pastel color than aeolids because evolution. The lovely sea bunny belongs to this subgroup! That concludes the dorid segment, time to talk about the better sea slugs.

Aeolid nudibranchs are your neon sea slugs. Instead of a branchial plume, they’ve got cerata (singular is ceras). Cerata are pretty much jellyfish-like tentacles that store nematocysts. What are nematocysts? Nematocysts are stinging cells that are produced by jellyfish and a few other organisms (like hydroids). Aeolid sea slugs don’t produce these naturally, so instead, they steal them. Mature nematocysts explode on contact, but immature ones don’t, and are like buds. An aeolid’s cerata are all connected to its digestive system, allowing immature nematocysts to be carried into the tips of the cerata, into cnidosacs, where they will then mature. Gosh there’s a lot of vocabulary that needs defining. Cnidosacs are sacs at the tip of cerata that hold nematocysts and discharge them as a defense. This action is involuntary, so an aeolid can’t release its nematocysts whenever, they are only discharged as part of the organism’s fight or flight response. Aeolids also tend to have the brightest coloring out of all the sea slugs due to aposematism (their color is a warning to potential predators). 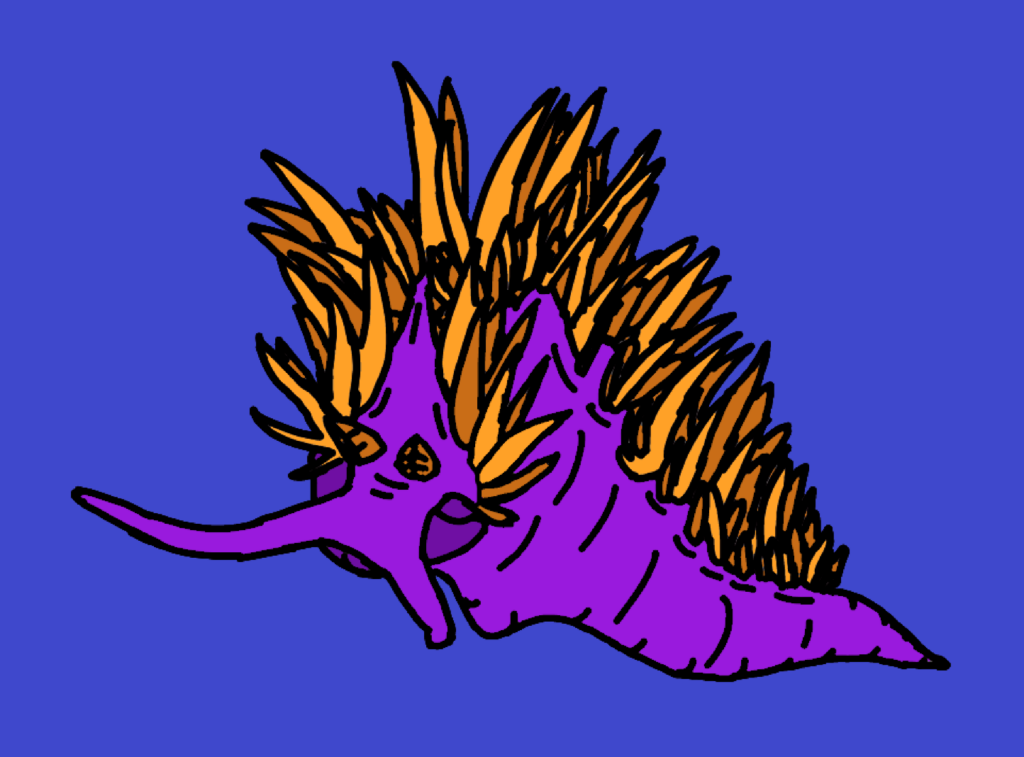 Above is the Spanish shawl sea slug, a species of aeolid nudibranch. Also, the coloring is in fact accurate, they are really that bright and colorful. The orange spine-like features are its cerata, and the orange feather-like two features are rhinophores. In this species, the oral tentacles are very pronounced.

Next up in the series is my favorite sea slug clade: sacoglossa.