Let’s start where we left off (otherwise it would be a tad weird). I had just finished my task of murdering five generations of chickens, and now I had found some pixies.

It wasn’t long until I tracked down where their village was. Quite frankly, it was pathetic. The entire village, save for two blocks, was on top of water. The village as a whole was maybe twenty blocks in total, which looked even smaller as it was practically floating on the ocean. The hovels, or homes, were really cute though, so I made sure to steal them. As for the pixies, they were flying around and some even went to the nearby forest.

I then saw my screen flash pink for a second, but thanks to my bestiary obsession, I knew it must’ve been a siren. I quickly crafted earplugs, but by the time I put them in, I was already in the water. And… there was a sea serpent. It was just awful placement, really. I had my overpowered bow, so I shot the siren until it dropped dead, and ran away from the serpent. I came back three minutes later to get some pixies, and the sea serpent was nowhere to be seen. There were, however, a couple of shiny scales, no doubt loot from the siren.

I decided to mark down the coordinates of the pixie village for later, since I couldn’t see a single pixie that I could reach. I kept going through the dark oak 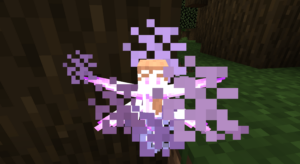 forest until I heard a faint “hello”. Yet another village! I assumed this one would be small too, but it definitely wasn’t. There were at least ten pixies hovering around, probably more somewhere nearby. I got my jars, let them take paper out of my inventory so that they would come close enough for capturing, and I cut their population in half. It was awesome, despite almost dying when I leapt off a cliff to try to catch one.

Then I headed back to where I left my horse, Thyme, and the villager. I got there at midday, only to discover the villager had become a zombie. Thyme was alive, thankfully, but his companion was not. I would like to say I went to the village or made a small memorial, but I instead went home (just when you thought my apathy was going away).

I got maybe halfway home when I saw a dragon roost (For reference: a roost is above ground, a den is underground). I would usually stay away, but I didn’t see the dragon, so I left Thyme and went to check it out. It was bordering the coast, so I at least had a plan of escape. I saw the acacia village a few hundred blocks away, and I recognized it as the village closest to my home. I looted the roost quickly, then noticed a red blur in the trees. Fuck. I jumped into the ocean and hoped there wasn’t a sea serpent. For once, there actually wasn’t a serpent and things turned out alright.

I thought it would be a fantastic idea to shoot this thing that was three times my size and could breathe fire. It was, since the dragon didn’t notice me, but it could’ve ended badly, very badly. I mounted Thyme and kept shooting arrows at the fire dragon, and found that it was male, by its coloring (males have spots on their wings according to the bestiary). Then it started heading towards the village, straight for my base. I rode to catch up, but it flew a lot faster than Thyme could run. The dragon flew past my base. Let me rephrase: a fucking fire-breathing dragon that destroys shit and chars the rest flew not even a hundred blocks past my base.

It ended up in a forest and, inevitably, wiped out a bunch of trees. I left Thyme in a pool of water so he wouldn’t get burned, and I ran to the tree-tops. I kept shooting my arrows as the dragon sort of just set half the forest ablaze. Miraculously, I was only set on fire once. I kept firing my arrows at the creature and then I got an achievement: Dragonslayer. It was kind of sad because the dragon was very pretty, but hey, now I have cool loot. 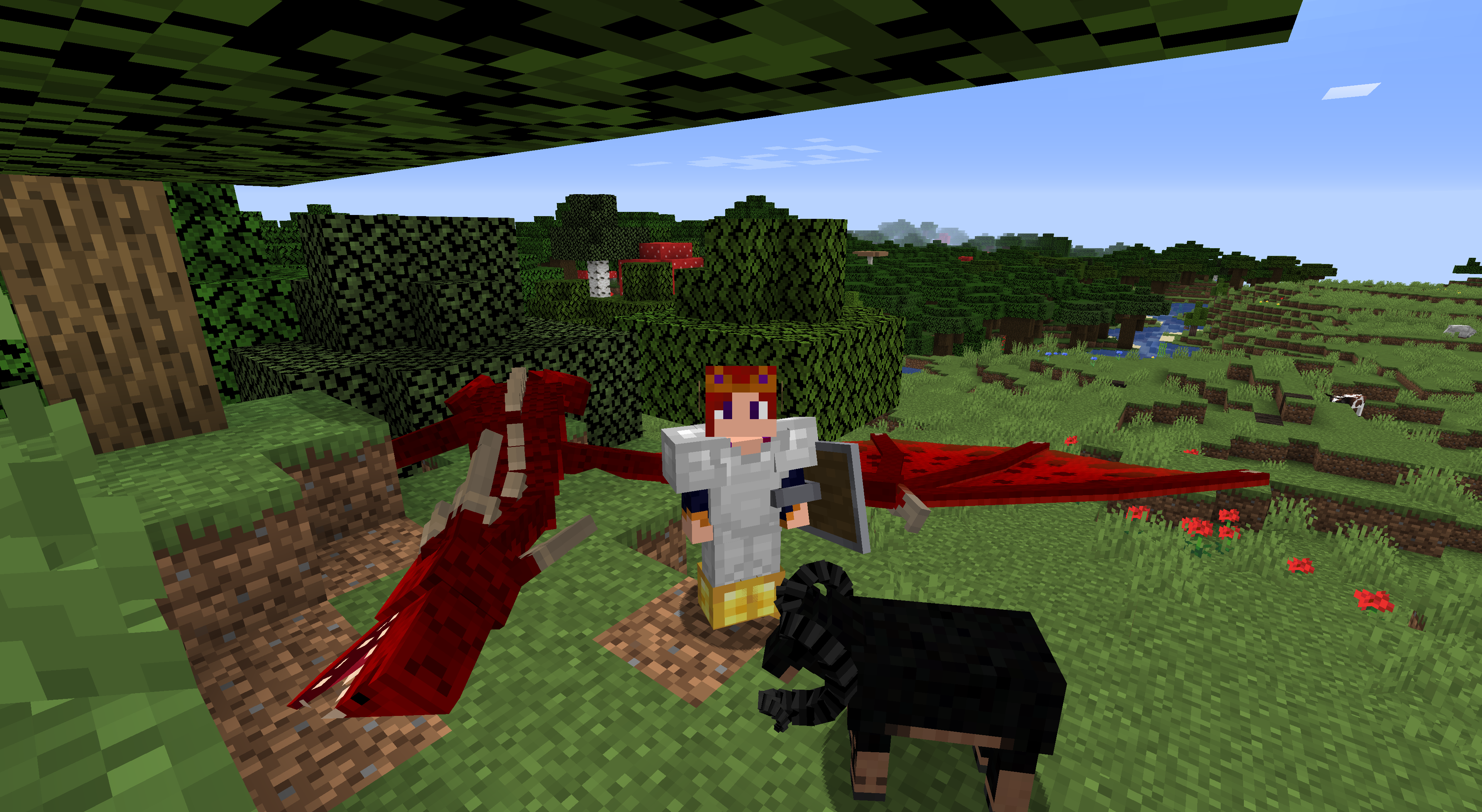 I looked at it for a while, and then decided I should loot it. I punched it a couple times because I didn’t know where to click, but eventually I figured it out. I got some scales (that looked epic), a few dragon bones (also epic), and a heart (very epic). I set off to make tools, and found a use for wither bones. I made most of a set of red dragon armour, but I was short JUST ONE scale. I also made a pickaxe and decided to keep the rest of the dragon bones in case I needed them for something urgent.

All of that happened rather quickly (within maybe two hours of pure gameplay), but I’m really happy with where I ended up. Things keep dying around or because of me, and that’s absolutely fine.

Oh, and also, I’m going to be taking a brief hiatus for about a month or so. That means no posts until August at least.

To start off with, I got a helluva lot of new pike. By a helluva lot, I mean five, increasing my total amount of pike from a measly three to eight. In order of 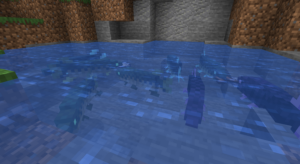 capture: Abyss, Astro, Nebula, Atlas, Stella, Warp, Alien, and Singularity. I hate to say it, but I don’t think I should get more since the pike lake is pretty much full. But, since I really like pike and don’t give a shit about their living conditions, I’m going to ignore that bit.

After lolling about the base, I headed for the nether to do some cleaning up. It took twenty minutes, three hoes, an axe, and half my sanity, but I cleared out the area surrounding my portal. I then went to the nether fortress and lit up one of the blaze spawners and destroyed the other one. The lighting up didn’t work at first, so I made sure to cover every single block with torches and that worked, somewhat. Eventually I gave up and went mining to the east in hopes of entering a new biome. It devastated my diamond pickaxe and I got nothing out of it except a fuck ton of netherrack. I also decided to call my cockatrice that I left protecting my portal Henderson, named after someone I have yet to determine.

I went back to the overworld to collect chicken eggs, and ended up with two rotten eggs. I had an extra two in the chest, so I threw them all and got two cockatrices; one male, one female. I was in the mood to mine, so I went to my the mine and allowed my thoughts to slip into oblivion. This lasted approximately one hour before I got painstakingly bored and wanted to do something that didn’t include ores, stone, or caves. I was heading back to my base when I read a message in chat: “Cockatrice was slain by zombie”. I hurried to the surface with my two baby cockatrices to find a swarm of zombies hovering around a bunch of feathers and wither bones; no doubt my deceased cockatrice. I quickly killed them and found my wonderful Moorhen’s remains on the ground. I made a small grave and set to work on a safer area for my cockatrices.

I made a den of sorts for my lovely cockatrices and went on to name my two new cockatrice. The female one was to be named Moorhen Jr., and the male was now Hennibal. The den I made was tiny, but I’m planning on expanding it. I also decided I had way too many chickens in the Big House, so I slaughtered them all in rage. I have to say, committing genocide turned out to be fun, despite raising slight concerns for my mental state. I also took a bunch of screenshots around the base for comparison to day one. 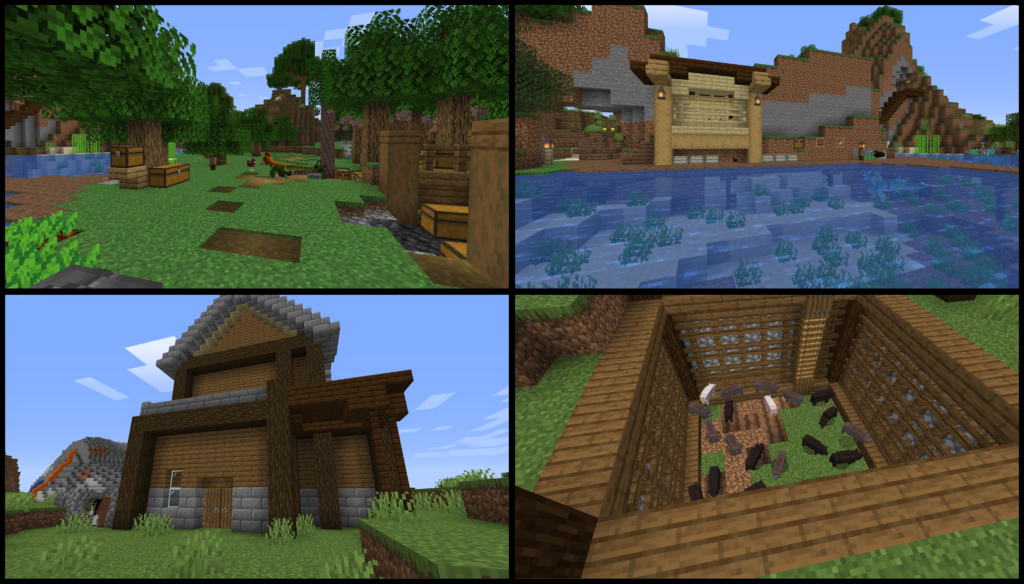 I wanted to be away from all the murder, so I went north-ish, then realized my inventory was full of ore, rotten flesh, and a bunch of garbage. I went back to put it away and went to the lake for some fresh pike. I saw one had an enchanted bow, so naturally I killed it to procure the weapon. It turned out to have practically no durability left, but it did have mending as an enchantment, along with flame. I immediately got my power III enchanted book and applied it to the bow. I went back to the village with the ultimate arsenal: a half-broken diamond pickaxe, a stymphalian bird dagger (while it sounds awesome, it’s pretty much an iron sword but ever so *slightly* faster), and an overpowered bow that is in desperate need of XP.

I’m not sure whether I mentioned it before or not, so I’ll just say it now: I got a 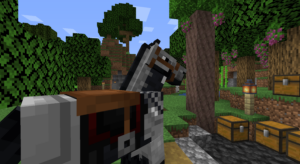 new horse. I’m not planning to replace Sir Ginger, but I felt that I needed a horse that can actually jump a decent height. This horse, dubbed Mister Thyme, is a black horse with white splotches. I had decided he’s dating Sir Ginger, so I’m feeling rather bad about separating the two of them. Actually, nah. I live to cause pain and I do not feel the least bit guilty about anything except that one time in fifth grade that a teacher shouted at me. But hey, I’d call that resentment, not guilt (Fuck you teach, I’m glad I didn’t have your class).

Moving on from my hatred of that specific teacher, I rode Thyme to the acacia village where I then saw some cockatrices. They noticed me and started to charge. The thing about cockatrices is that you can’t look at them, lest they begin to burn your soul (I assume this is what happens, I can’t think of anything else that could make a cockatrice hurt you by literally just staring). I ran to a nearby hill that I was quite sure a cockatrice couldn’t climb and tied Thyme to a fence. I proceeded to kill said cockatrices with my bow, which was slowly repaired as the XP dropped from the beasts. I was about to keep going past the village, but three more cockatrices appeared out of nowhere, almost killing me.

I did eventually make it out alive, but only after dying to one of the buggers. I continued my journey until I reached a very large desert with a village. Naturally, I destroyed their farms, took their belongings, and kidnapped a 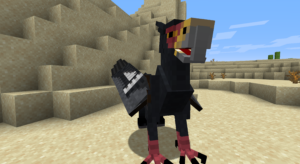 farmer. For some reason, they had nothing against this. I left the farmer in a boat with my horse so that I might explore further without them slowing me down. I also found a cool hippogryph, that was pretty much all black and looked like a vulture.

Eventually, I got to a dark oak forest, and I heard creepy giggling coming form above the canopy. A pixie! I set up base so that I might make jars to catch them and also to keep my items safe. The bestiary turned out to be a help, since I had learned pixies grab anything you’re not keeping in your hotbar. This was also when I decided I should take a break.

So, without further ado, farewell y’all (at least until I make another post).

Also, I was thinking to start a new series of sorts for 1.17, since none of the mods I’m using are compatible for that version. So, there’s probably going to be some new stuff soon (I know I said without further ado, but I needed a transition).