Somehow over a week has gone by and a lot has happened, true, but it doesn’t feel like it (I should probably make these shorter, but when have I ever listened to reason?).  So, starting off, I went to go get the hippocampus, this time with a saddle.

Right off the bat, I found my cockatrice wandering on the outskirts of the forest. I led him back home and named him Henry (Hen-ry, get it? Ah, I’m going insane). Despite having backtracked not five minutes into my journey, I pressed forward and got to the hippocampus. Admittedly, I did get lost in the jungle (multiple times), but I got there in the end.

I arrived to see that the hippocampus had not moved, and I put the saddle on it. It was ridiculously fast. As soon as its little leg-flipper-things hit the water, 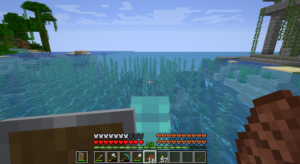 my frames sharply decreased. Thankfully, turning down my render distance helped. I got to a bay with some strange rock formations and left the hippocampus as I went to go see why there was a perfectly spherical mountain.

That was a mistake, but it didn’t kill me for once. It was a cyclops den, so I did what I did with the first one; burrowed under it and hit the cyclops from below. After a few minutes of wasting my diamond pickaxe’s durability, I got into a good spot and killed the beast. It dropped wool, mutton, and – drumroll please – a cyclops eye! It’s listed as a legendary weapon, but all it seems to do it weaken nearby mobs; neither legendary nor a weapon. I have to thank the ocean for this, seeing as it’s the only thing that stopped the cyclops from walking over and snapping my neck. For creatures that hate water so much they won’t go into it (even if it means killing me), their dens always seem to be right next to the ocean.

I then decided to head back to my hippocampus (who was laying down on the ground because I ordered it to sit), but I got distracted by some pretty ladies on a rock. Sirens. I was wearing earplugs on the off chance that I might run into them, so I didn’t get pulled in by their song. After much hesitation, I swam towards them to kill them but for some reason, they swam away after I returned to land. I then went after one of them and tried to kill it, unaware there was a huge sea serpent right next to it.

Somehow, I didn’t die, but I was permanently scarred. I struggled to get the hippocampus and myself out since the bugger wouldn’t leave. I ended up 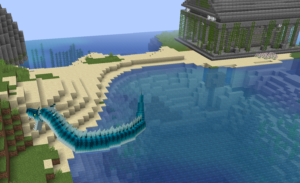 spending 30 minutes underground waiting for the serpent to leave. Eventually it did, but that half hour was boring as all heck. The trek back home was just as slow, probably because I was riding an aquatic creature on dry land. I feel like the hippocampus should’ve died from lack of water, but I’m not one to complain about the survival of my pets.

I did make it back home in one piece, and in that one piece, I decided to flatten a hill and use the dirt to expand my backyard. It took a while, but I planted some grass and flowers and it now looks somewhat natural. Using this extra 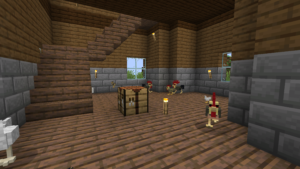 space behind the house I was building (which will now be addressed as Big House), I made some animal pens. One pen for breeding animals, one for pets, and one pen embedded into the ground for pigs, my new food supply. In case you haven’t noticed the picture, Big House has become infested with chickens (sort of my fault but I just really like throwing eggs).

I eventually got bored of feeding the pigs by hand because they eat A LOT, so I devised a plan. Due to the amazing Genetic Animals mod, most farm animals eat grass to satiate their hunger, so I put some grass blocks under the pen with a gap between the grass layer and dirt layer (where the pigs are). That way, the pigs can’t eat all of the grass, and the grass can still spread even if they eat all 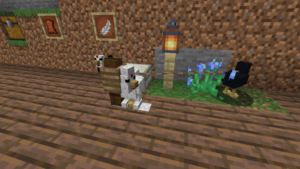 the grass available to them. After a lot of waiting for the grass to grow (yes, I watched it grow), I moved on to getting some chickens. I went to the nearby mountains and found three. One black, one fuzzy white, and one black chicken with a white head.

At this point, I’d had enough of farm work, so I set off to the nether. I gathered some warped fungus and placed it around my portal to repel the big boar things (hoglins? I think?). Anyways, I cleared the area around my nether portal, and through sheer determination, I got rid of a bunch of of those weird nether 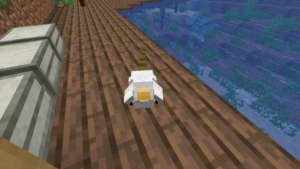 stem mushroom tree things. I went back for some cobblestone for a wall, and picked up a rotten egg. I threw it and a cockatrice chick hatched. I was really happy, and I decided to name her Moorhen (again with the puns).

I sat her down and went back to the nether to place the wall and to hopefully find a new biome. Good news, I made the wall. Bad news, I’m surrounded by lava lakes on all sides. I used some cobble to make a flimsy bridge across one of the smaller lakes, and I mined into the side of the cavern from there. I eventually came across an opening, but it was still in the crimson forest biome 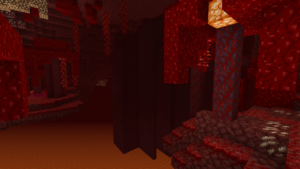 that I had spawned in. Then I noticed something. A pillar of nether brick. I had found a nether fortress by pure luck! I marked the spot and went back to my base with an inventory full of netherrack and fungi.

After all that happened within this one “day” I decided to log off and continue it later. So, due to my laziness, I have nothing else to say that’s Minecraft-related.

Happy Pride Month, and I hope y’all have been enjoying your summer.