Sorry for the wait, but I have been rather busy with some of my amazing friends, one of whom made a beautiful poem about some Twitch chat lore. This is the link if you’re interested: A Story is Told.

Anyways, all I suggest is that you go check it out if you’re interested, she’s an awesome writer. I also made a post earlier today, explaining our different roles in the poem if you’re a bit confused.

Regarding Minecraft, I have done a bit of work in Vellichor, mostly centered 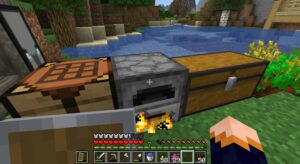 around the house on the hill. I decided to make the base stone brick, since I had a lot left over from making stairs for the mine. Sadly, I ran out, so I had to sit around and wait for more stone to smelt.

During the time it took the stone to smelt, I went ahead and finished the framework of the house, along with the spruce walls. I also went out to look for a beach where I could get some sand for glass, but I couldn’t find one. 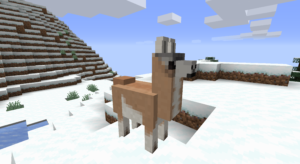 However, I did find an extreme hills biome (the one with mountains) that had some fluffy llamas! Normally, the llamas would look rather derpy, but the Genetic Animals Mod made them look super fuzzy.

I also found a pretty creature from the Ice and Fire Mod, which after checking online, I confirmed was a hippogryph! The world-wide web also said they were 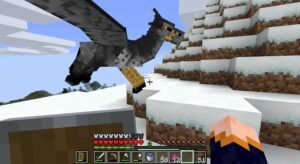 neutral mobs who would only attack if hungry. I figured since the llamas were intact, it would be safe to approach, and I was proven wrong. The hippogryph launched me into the air after I failed to block its attack, almost killing me. I sadly had to cut its life short because trying to outrun a creature with wings would inevitably end in my own death. So, I killed it and it dropped feathers and leather, which I renamed “RIP Alpine Hippogryph” (I really should stop trusting the creatures the Ice and Fire mod adds, huh?).

After that traumatizing trip, I went back to base barely before sundown and went to sleep. I awoke the next morning and immediately took the stone out of 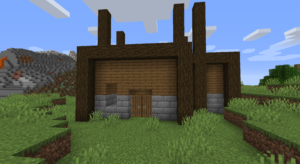 the furnace to make stone bricks and went to finish the bottom floor of the house. I decided on river planks for the floor and, after accidentally making the wrong kind of door, I decided I was happy with the first floor. Of course, I still need to add windows and a couple decorations, but I think it looks decent.