Starting off, I did practically nothing useful or progressive in terms of the game, however, I built a bit and got some other stuff. After my encounter with a

dragon, I have to say I was eager to return to a humbler lifestyle. I noticed that one of my chickens was missing, the only female one, meaning I couldn’t get any chicks nor eggs. I sped off on a (local) expedition which led me to the swamp and two chickens. Both were female, and though I only needed one, the other joined along.

When I led them back to the hen house, I bred the two with roosters and proceeded to leave. As you may know, my hen house is halfway inside a hill and halfway on the shallow lake in front of my setup. As I was swimming back to 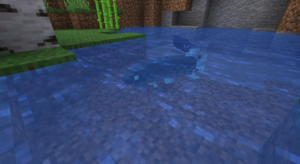 my wheat farm/setup, I saw a pretty fish. Naturally, I put it in a bucket and read its tagline (the part that specifies its species in Update Aquatic). It was a Supercharged Pike that had really awesome colors, so I renamed him “Astro” and put him in with Abyss. As you can see from the photo, Astro is a darkish gray/navy with almost neon cyan eyes and fins.

After the whole ordeal with getting new animals, I realized that though I had areas for all of them, I didn’t have anywhere for myself to live. I quickly ran to where I planted a bunch of saplings and chopped down the trees, along with planting new ones. Of course, I needed none of the trees that I chopped down, so the trip was completely useless other than filling my chests.

I got some dark oak logs, since the trees grow rather big and I had over a stack, and I made a quick outline of the framework. It was getting late, so I used dirt as a substitute for the windows and the door and left it at that.