I didn’t post yesterday, so I decided to post today. Self-imposed deadlines suck, don’t they? Anyways, today and for a bit of yesterday, I tried to stay a tad more safe, what with the dragon and cyclopes (apparently that’s the plural, but it’s weird).

I did actually manage to loot the village, with a minor death here or there, but it turned out fine in the end. All the villagers were gone, for some strange reason, couldn’t be anything to do with their town being a magnet for the magical and terrifying. It was a bit difficult near the cyclopes, but I got 3 emeralds, bread, hay bales, and a saddle. I also got a stack of charred dirt, charred grass, and charred cobblestone along with some ash. I thought it looked cool, so I went over to the dragon’s nest (again) and it ended with me stuck in a hole burrowing my way out of the village (again).

As I was heading back, I noticed there was a pretty chestnut horse roaming around the plains. Instead of walking away from the cyclops plains, I went into 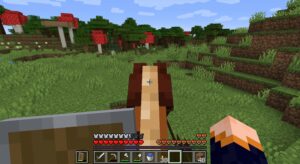 it and tamed my horse. Thankfully, nothing killed me and I got a fast horse. Naturally, this meant I had to ride him, and I did. I went in circles, lost my sense of direction, then somehow ended up in a dark oak forest and figured I needed dark oak anyway.

Having gotten a horse, wood, and a bunch of other stuff, I was content to go back home. Of course, I got lost and ended up in a swamp, but hey, what can you do? Eventually I got back to base and dropped my new horse at the pen. I 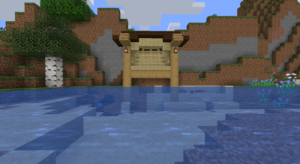 also put some hay in for the animals to eat instead of the grass. I moved the chickens into their new hen house that now has a nice, dark oak roof.